Often ceremonies must be done indoors, where real fires are not permitted.  Many people simply believe that a red bulb, some cellophane and a few logs are adequate for an indoor campfire.  However, this does not look real and will not engage the audience by staring into the fire like they do with a real campfire.  I have spent considerable time researching and experimenting with how to build the most realistic indoor campfire possible in order to create the desired mood when performing my ceremonies.  As a result, unit leaders often examine how I have built my campfire, so they can construct one of their own.  To assist in this effort, I have provided some photographs and assembly tips to help those interested in building their own fake fire.  The idea is to engage as many senses as possible to produce the desired effect.

Almost all of the materials you need are available from CyberbaseTradingPost.com.  The total cost will be around $200, but much of it may already be laying around your house.  Here is what you will need:

The basic concept is to build a cabin layout style fire, with the silk flame protruding above it, and strobe lights to create a glowing effect underneath.  The fog machine will create the illusion of smoke, and the audio CD will add the appropriate background noise. You can build a fire in stages, adding effects as you go to keep both the cost down and the time needed to build the fire.  The most important part of the fire is the silk flame, so that is where you should start.  Next, I would add the “glowing embers” using the egg strobes.  Rocks, audio, and fog may be added at any time.

First, cut a 2′ diameter circle from a piece of plywood.  This is your base.

Attach two pieces of fire wood to the base, using screws from underneath.  These are the only two pieces attached permanently to the base.

Add the two egg strobes (these screw into standard sockets, but if you use an outdoor flood lamp socket, you may need “socket extenders” due to the shape of the bulbs).  Also add a red light bulb to the middle – the brighter the better, but at least 25 or 40 watts – don’t use 15 watt bulbs as they don’t show up well.  Hint: egg strobes have the ability to vary the strobe length – set both of them to blink slowly for more realism, and have them blink at slightly different intervals for the best effect.

As an alternative, use flashing rope lights instead of the egg strobes. These were not available when I first built my fake campfire, but actually work better to create the embers. Set the silk flame in place, then wrap the rope lights around the base and vary the twinkling effect to look like glowing embers.

Set the Silk flame in place so you have a reference for your fire layout. 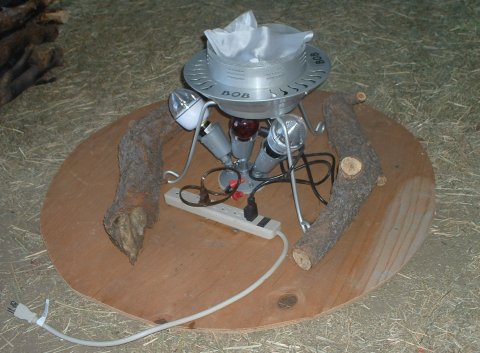 Now build your fire around the silk flame, nailing each piece to the others until it becomes a solid stack (except don’t nail it to the two supporting pieces on the base, as you will want to remove the top to replace light bulbs in the future).

Take the fire stack off and turn it upside down to add the fabric. 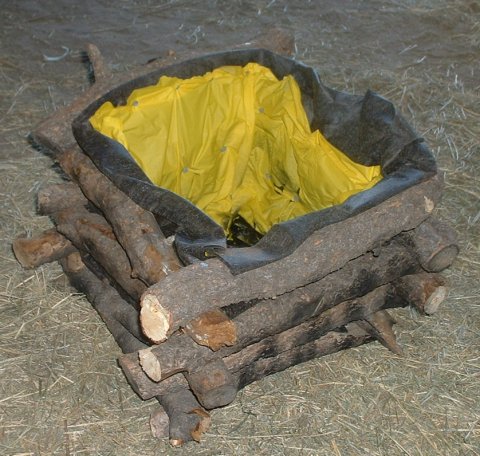 Replace the fire stack on top of the silk flame.  A few shots of black spray paint can add the effect of charred wood.

You can add Styrofoam rocks around the base if desired for more realism.  To create a Styrofoam rock, cut, break, or chisel a piece of Styrofoam into the desired shape.  Paint it with a light gray paint – do NOT use spray paint as this will destroy the foam.  Let the paint dry, then dry brush on a dark brown or charcoal color.  Then dry brush on a light beige or rose color (use the lightest color last when dry brushing on the highlights).  Now you have rocks for your fire pit, which you can glue to the base.  Remember to leave a small opening for the fog machine.

When using a fog machine, set it on the floor behind the fire, with the nozzle pointed right at the fire.  The fan from the silk flame will draw in the fog, and blow it up through the fire, making it look just like smoke.  Here is the completed result – this looks awesome in a dark room!

While the above instructions create a very realistic looking fire (I’ve actually had someone call the fire department during one of my scout ceremonies when using this in a school gymnasium), the cost and labor may be more than what some people have in mind. Here is an inexpensive alternative that will still produce very acceptable results (and the kids may be less likely to destroy it).

First, get a Halloween cauldron, then simply bring some firewood with you and pile it around the cauldron like a fire layout. 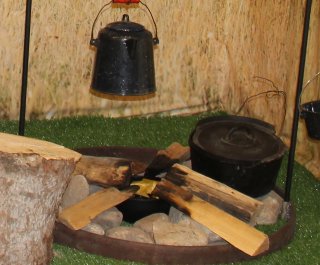